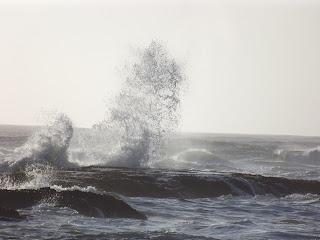 Photo by Gina Navarro-Brown. All copyrights belong to her. 2011

What is the problem with a split stance? What does it even mean to be in a split stance? Typically, what happens in a split stance is you do not commit to moving forward or backward in response to an attack. This leaves you in the same place you started and you are about to absorb the full impact of your attack that you are facing.

Remember, in Kenpo, we train the coordination of movements between upper and lower body. That means footwork is essential. Your base is essential in order to move your upper body the way that you want to.

I remember having this conversation with Sensei Chuck. In Yellow Belt, there is a particular problem with splitting the stance on Attacking Mace. Often times people miss it because they do not have the self-awareness to feel their error. If you simply think about what you are doing more, the self-awareness of what you do right and wrong will be more evident. At Yellow Belt, we move back for a reason. We let the beginning student have tools to gain time to react. It comes back to the idea that timing and distance are essential in pulling off techniques. It's important to analyze timing and distance in all situations.
Posted by Jesse Brown at 6:50 AM No comments: 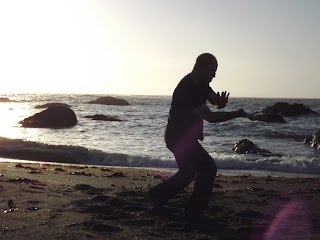 Five Swords, an orange belt technique in the American Kenpo Karate System, is one of those techniques that you could talk for a long time about. I had started a series of personal journal writings on Yellow Belt techniques, and I was going to continue that originally, but then I found this great photo my wife took of me at the ocean doing Five Swords, so I thought  I would talk about that for one entry here.

Five Swords teaches a multiplicity of things and it seems it can be grafted with so many other ideas and techniques. I know training at my sensei's dojo, Epperson Bros. Kenpo Karate Dojo in Chico, California, we have gone over countless grafts with this particular technique.

I know some people may be asking at this point, "What is a graft?" A graft is when you take two or more techniques and blend them together. First, you have to know the original technique and what it does and how to perform it, but then the fun part comes in where you can go through a technique and stop part way through and ask, "What if?"

Let's face it, nothing ever happens as we plan it in a dojo. We have to expect the unexpected. So, it is critical for us to recognize positions and what if scenarios so we can think on our feet. Just stop for a second and do  the first move of Five Swords. How many different techniques can you move to from there. Or, if you don't like that, stop after the second move, the heel palm to the face, and ask yourself what other techniques do you recognize from there? Or, even better, how would you finish the technique? Everyone is different. They will see something different.

In this photo, my wife caught be between unloading my chop/check and loading my final chop with torque and marriage-with-gravity. There is a transition stance that you hit at this point as you position your hands for the final move. You have the choice to finish, or what if the other hand comes flying around, even by accident? Then you have the right hand in position to throw another block and extend the technique, or even start a whole new one. In Kenpo, you always want to have a backup plan. Your other hand should always be ready to meet the "what if" possibility.

Here is another thing to think about with Five Swords. Think about which power principles you are using to add power to all of your blocks, strikes, and punches. This is a technique loaded with power principles and the ability to really unload a person's potential for power just based on the body mechanics alone. You have backup mass, on the first move, torque on the second move, then there is borrowed force, more torque and marriage with gravity that follow. This is an extremely powerful tool, and powerful knowledge, to think about as you train your Kenpo.

Just like professional athletes, it is important for us to analyze our art and our motion. That  is how we get better. You have to train it, but you also have to analyze it. If you like to study motion, then Kenpo may be the art for you if you are not doing it now.

I hope you have enjoyed the thoughts.

Training in Kenpo Karate: A look at Unfurling Crane

This title sounds kind of obvious and lacks the excitement of another title meant to draw attention, but then again, Kenpo is not about fancy anything. It is about getting the job done. That is what I want to talk about. How do we get the job done? We work at it. Kenpo is not a fancy art, although I suppose it has the potential to be fancy if that is one's focus. It is an art that asks you to go to work every day and practice and not give up on your training. It is a part of daily life. Training must be made part of daily life so one can master it and, potentially save your life if it comes down to it.

How does one train in Kenpo? There are as many ways to train as there are people who practice it. It is up to the individual. It is an art of the  individual. What one must do is follow the principles of Kenpo and his or her training will be sound. Kenpo is a set of rules that are designed to protect you if you follow them in the course of your martial arts training and performance. What are some of these principles? There are many. 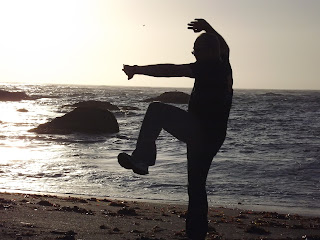 Take the photo above. My wife, Gina, did a wonderful job of capturing me in the middle of Unfurling crane. If you are not familiar with this self-defense technique, this is a great example of Kenpo principles. This particular moment, you see the Kenpo principle of economy of motion in effect because I am doing three things, actually four things, at once. The leg is completing a front scoop kick, the hand in the middle of the picture is keeping the imaginary opponent standing upright for the soon-to-follow blow of the hand cocked and ready to deliver a chop to the neck, and the foot is not only completing the motion of the kick, it is loaded for a downward side thrust kick to the opposing knee. This technique is one of the more advanced in the Kenpo arsenal. What I described is centered on one motion of three parts of the body. This particular technique is based on multiple attacks and is placed fairly high in the web of knowledge that Mr. Parker designed.

But not everything has to be complex. Simplicity is at the heart of Kenpo. Complexity is what you choose to train if you like that. Sophistication lies in the movement based on the principles. I single move or concept can be more than enough.

Take the simple concept and definition of a check. A check, in Kenpo terms, is the nullification of a weapon. If you pin an opponent's arm to his or her body, then that weapon is nullified until you release it. What is important when executing principles is to follow the natural movements and guidelines of the human body. When when you use common sense and logic in figuring out the execution of your moves, then the principles of Kenpo will be largely followed. This simple act can, and often will, be enough to give you that advantage or just avoid the whole situation. Economy of motion is the key. Don't do more than you have to. If you check and cancel all of the opponent's weapons with one move, that might be enough to make them think twice and walk away. You never know, but economy of motion is key.

Unfurling Crane is a great example of Kenpo going to the extreme to show possible combinations. Every technique is about teaching the practitioner a variety of ideas and to get them thinking on possible ideas. Kenpo is a thinker's art, for sure. It is up to each of us to analyze and create the Kenpo that works for us. If you are an athlete and enjoy motion, take Kenpo, because it allows you the freedom to think on your own.

I know from talking with my sensei, Chuck Epperson, he wants us to think on our own. We need to train and practice our art. I start with the basics and try to always reinforce the basics and the principles. That is where everything comes from. There is a reason yellow belt is the foundation of all other belts that follow. If you look carefully at yellow belt, it is an extraordinary training ground for every practitioner to begin with. It is the start of the web of knowledge for Kenpoists. Next time you sit down to train, take another look at that opening belt. What is even more amazing, it is the first thing that everyone is taught!

I hope you enjoyed the article and enjoy training.

Jesse
Posted by Jesse Brown at 7:19 AM 2 comments:

Shout Outs for Friends and Places

I want to give a shout out today to someone who is a friend, and I am also a huge fan of her music. I have watched her from afar work and labor over her art to make something people can share in and have a common experience. I love her work and what she does, how she interprets her music and lyrics. She has a depth and feeling to her sound that I admire very much. Her name is Kiyomi and she just released her new album recently. You can find her album here:

Keep up the great work, Kiyomi!

I have to give another shout out to my sensei here. He recently just got a facebook page up and running. I have been training with him for about 20 years. Chuck Epperson is an 8th degree black belt and the owner and founder of Epperson Brothers Kenpo Karate Dojo. He teaches in Chico and I train with him at least once a month, commuting from the San Francisco Bay Area to a places 3 hours north. Excellence, integrity, dedication cannot be replaced.

Chuck Epperson teaches six days a week and gives seminars in many different places. He is the top ranked student of Richard 'Huk' Planas and is part of the Parker-Planas bloodline. Also, as if excellent Kenpo was not enough, he trains student in the art of Philippino stick and knife fighting on Saturdays, all the while applying Kenpo principles and concepts.

If you are interested or wondering more about what his school and art is like, please check him out here Epperson Brothers Kenpo Karate Dojo on Facebook.com and at this link:


Keep up the great work sensei!