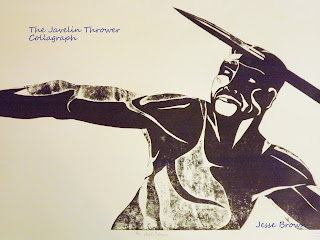 The Javelin Thrower, Collagraph Print
This is one of many in my Greek series. I did many that mimicked the Black Figure style of vase painting. I liked this style as a way of printing to remind the viewer of the powerful simplicity of black and white imagery that could be seen on the vases of ancient Greece. The ancient Olympians were often highly revered in Greek poetry, much the same as heroes in the military and ancient battle, such as Homer's Iliad. Epic poetry often immortalized athletes and heroes. Based on what I studied, back in ancient times, there was a much closer association between athletics and the military. One of the Olympic events was to race in full armor (made of bronze, I presume) for 100 yards. There was wrestling, throwing of spears, and boxing. Athletic training was closely associated with military training.
In Sparta, being a soldier was a way of life. We ofen hear of Athens during the history of 5th century BCE Greek times, but Spartans were also very influential as well. They did not have the buildings that we associate with the Acropolis, but they had the military that was leading the Greeks during the 5th BCE. The Olympics go back several centuries prior to that time. My thesis goes into greater detail about the relationship between heroes, myth, and art.
Posted by Jesse Brown at 11:10 PM

Shout Outs for Friends and Places

I want to give a shout out today to someone who is a friend, and I am also a huge fan of her music. I have watched her from afar work and labor over her art to make something people can share in and have a common experience. I love her work and what she does, how she interprets her music and lyrics. She has a depth and feeling to her sound that I admire very much. Her name is Kiyomi and she just released her new album recently. You can find her album here:

Keep up the great work, Kiyomi!

I have to give another shout out to my sensei here. He recently just got a facebook page up and running. I have been training with him for about 20 years. Chuck Epperson is an 8th degree black belt and the owner and founder of Epperson Brothers Kenpo Karate Dojo. He teaches in Chico and I train with him at least once a month, commuting from the San Francisco Bay Area to a places 3 hours north. Excellence, integrity, dedication cannot be replaced.

Chuck Epperson teaches six days a week and gives seminars in many different places. He is the top ranked student of Richard 'Huk' Planas and is part of the Parker-Planas bloodline. Also, as if excellent Kenpo was not enough, he trains student in the art of Philippino stick and knife fighting on Saturdays, all the while applying Kenpo principles and concepts.

If you are interested or wondering more about what his school and art is like, please check him out here Epperson Brothers Kenpo Karate Dojo on Facebook.com and at this link:


Keep up the great work sensei!